House was won by Republicans.

Senate was won by Republicans.

Here Is The Evidence

Volume 2 – The Art of the Steal: Democrat Party Grand Strategy

The Capitol was breached by a cadre of organized, embedded, disguised antifablm teams of breachers, provocateurs, crisis actor and videographers, who worked in concert with each other. As a false flag, staged psy-op operation, to blame Trump and his supporters for their rioting and mayhem.

The team that breached the central, Rotunda entrance where Ashli Babbitt was murdered featured:

With several others identified in videos as possible co-conspirators.

Each of the Capitol building’s entrances had antifablm provocateurs assigned to breach it, armed with their signature metal batons, which they used to break glass and to cause other destruction.

(See photo on the left, below, to identify their signature batons).

The door to the Rotunda is shown in the photo on the right, below, and is the entrance where Furhatboy, John Sullivan and others were assigned by antifablm to breach, riot, and to videotape.

But this heavy metal door into the Rotunda (right photo above) could not have been opened from the outside.

Someone already inside the Rotunda opened it from the inside.

But it is impossible that people on the outside, on their own, could have opened the locked, reinforced metal doors.

Then, antifa provocateurs either already embedded inside or at the vanguard of the protestors, immediately stationed themselves in the middle of the Rotunda and directed protestors to the House chamber.

Therefore, these are the antifablm provocateurs (detailed below) who caused the murder of U.S. Air Force veteran Ashli Babbitt:

They are both, at minimum, guilty as accessories to manslaughter.

Here are the videos detailing their mendacious destruction, rioting, conspiracy, and ultimately the murder of Ashli Babbitt:

Note that he is dressed here in fake “Proud Boy” colors (but is actually a Pirelli Tire t-shirt.)

A Twitter thread by Professor Zhaung Zhou shows a video analysis focused on Furhatboy, videotaped by John Sullivan (“Jayden X”), which clearly demonstrates that Furhatboy entered the Rotunda from THE BASEMENT, joining the crowd from BEHIND the Capitol police, from a secure, embedded position, to begin his antifablm provocateur buffoonish theatrical performance. https://twitter.com/politicalwilli/status/1349083364729360384

Clearly, to have the patriots be blamed for HIS behavior.

This first photo below is of the interior door (the “Speakers Lobby door”), from the Rotunda to a hallway leading toward the House chamber, which is where Ashli Babbit was shot to death.

Furhatboy ran down the side stairwell immediately after the shooting. He removed his identifying shirt and fur hat, replacing that with the antifablm helmet handed him moments before by a possible antifablm co-conspirator. (Who, in the video, is wearing a “Don’t tread on me” yellow flag draped over his body.) Furhatboy had used the helmet to smash the windows through which Ashli Babbitt climbed when she was shot.

from Utah, who worked in tandem with Furhatboy, videotaping the attempt to incite a riot, break glass, storm the Capitol building, and ultimately caused the murder of Ashli Babbitt. These men have Ashli’s blood on their hands.

These are graphic videos of the actual murder of Ashli Babbit. They are extremely horrific but must be archived for those who want to see them, to understand the full horror of what these two men did.

[These two videos are currently being censored by Amazon’s fascist shutdown of the servers for the free-speech web site, Parler.]

From the side, shot by John Sullivan, showing the shooter: https://video.parler.com/89/dg/89dgdeeVcjVu.mp4

Angry, unarmed protestors, incensed by years of slander, unending attacks on them and their President, and the theft of a national election in November and the theft of both Georgia Senate seats the very night prior, followed these antifablm provocateurs into the Capitol, shouting to Stop the Steal. Despite that, the Trump supporters were 99.9% “patriotic and peaceful” as President Trump had encouraged, and wanted their voices heard about the recent, stolen election, and to prevent the certification of that election taking place inside the Capitol by lawmakers.

antifablm insurrectionists broke the windows throughout the Rotunda entry – and the Trump supporters a number of times stopped them from doing more damage. In one instance, from throwing metal stanchions at the statuary and overall causing the gratuitous damage that is the hallmark of this past year of antifablm riots.

The patriots were passionate, but it was antifablm that caused the destruction, breached the doors, and ultimately caused the murder of Ashli Babbitt.

It was a direct result of the actions of these two antifablm provocateurs (Furhatboy and John Sullivan), that Ashli Babbitt was martyred.

May God bless Ashli and keep her safe with Him in heaven.

January 6, 2021 #StopTheSteal walking tour of the U.S. Capitol, was a false flag operation by antifablm

A coordinated, false flag conspiracy by antifablm, the Capitol police, Speaker Pelosi, Mayor Bowser, the Metropolitan Police, and others. (Note: go to antifa.com, and you will be re-directed automatically to the Biden-Harris presidential campaign. antifablm is the armed wing of the Democrat Party.)

Extremism in the defense of liberty is no vice. And moderation in the pursuit of justice is no virtue. – Barry Goldwater

A lie gets halfway around the world before the truth has a chance to get its pants on. – Winston Churchill

This was a set-up.

(the photo above was taken after the event, to show the metal barriers)

This is where Ashli Babbitt was murdered by Capitol police

How did these antifablm members know ahead of time that the first person through the door would be murdered? In a video of her murder from the side, linked below under the Ashli Babbit heading, you can see the surprise on the face of the SWAT-style cops, standing next to Ashli in a line, who did not know that the cop on the inside of the next hallway would be firing directly toward THEM, and had his long gun aimed BACK toward the officer inside the door, who had murdered Ashli.

She was entering a HALLWAY and posed no danger to the officers right next to her, much less the officer in the next hallway, cowering in the alcove with a shaky pistol hold.

Who told the Capitol police to stand down at each step prior? Who instructed this officer to murder her?

Why were the Capitol police — who were outside the door, standing next to the protestors, NOT warned beforehand that the Capitol policeman inside the door would fire live bullets in their direction? (You have to see the expression of surprise on the police officers in the side-angle video.) Why would this officer shoot in the direction of fellow officers?

Leading the break through the metal barriers and up the Capitol steps were embedded, disguised antifablm provocateurs using techniques learned over a year of unpunished rioting and attacks on private and government property. They carried metal batons to break the windows of the doors (shown in the photo below), and the knowledge that the enabling Police State would not punish them — antifablm — the armed wing of the Democrat Party.

Those hunting photos for “rioters” should focus on those. Those who broke the windows, and those who tried to attack statues inside but were repelled by the patriots.

We were NOT armed, as has been written.

We did NOT destroy property, other than the windows broken by those people in front (predominately, if not all, antifablm). In fact, when one started throwing a metal stanchion in the rotunda near statues, we STOPPED him and told him “We’re not antifa”.

We ARE angry patriots INCENSED that the election was stolen, the election of both GA senate seats had been stolen just the night before the rally, antifablm rioted for months and nothing was done, antifablm continue to attack patriots in the streets of DC and the police enable it. Including this violent assault on a woman on the streets of DC just the night before, in full view of Metropolitan Police: https://www.newswars.com/patriots-beg-dc-police-to-arrest-woman-who-punched-trump-supporter-in-the-face-cops-mace-them-instead

We were PEACEFUL protestors who wanted to stop the steal and to have our voices heard.

We were angry patriots, led primarily by embedded antifablm, in coordination with the Capitol police, but the MURDER of Ashli Babbitt was somehow BLAMED on the UNARMED, peaceful protestors. On us.

Police never shot any antifablm rioters during MONTHS of rioting, killing, looting, burning, and maiming. During which they tore down statues, burned historic churches, burned and looted businesses, shut down roads, and attacked people at will.

But peaceful protestors have one of OURS murdered, and suddenly WE’RE the violent ones?

But also, why were there only about 20,000 protestors at the Capitol?

Why didn’t the hundreds of thousands who actually attended President Trump’s speech at the Ellipse march to the Capitol, as planned?

I heard that Mayor Bowser shut down Pennsylvania Ave. to prevent them from marching to the Capitol. Including those leaders who gave speeches and might have recognized the antifablm and the false flag signals.

But the media conflates the two events: 1. the large Trump speech rally at the Ellipse, with 2. the smaller, discreet rally at the Capitol, and blames Trump.

The Capitol police enabled the protestors into the House at each stage of entry, up to the point of the shooting.

And then a Capitol policeman murdered Ashli for no reason.

Caution: These are graphic videos of the murder of Ashli Babbit:

In 1998, Black leaders Jesse Jackson and Charles Rangel and others personally begged President Trump to lead America and to enact his vision to use the American Free Enterprise System to unleash economic growth for all people.

He subsequently agreed. At great personal cost to him and his family

The White Liberal Establishment has never forgiven him — even now, as Black approval for him stands at 40%. 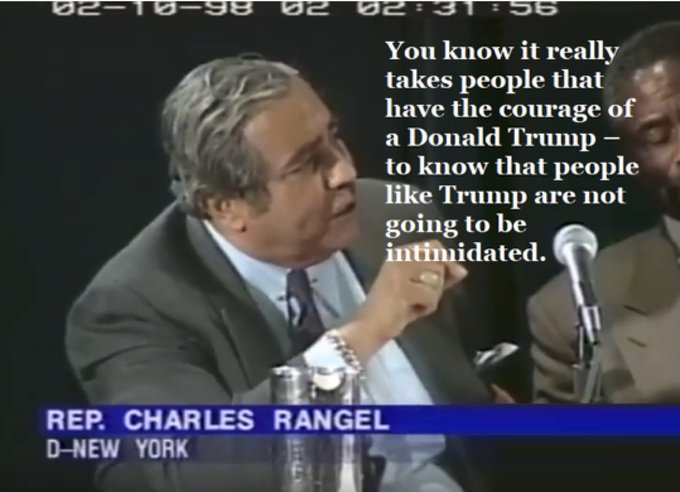 By Eagle in NYC on January 9, 2021 | Leave a comment
Posted in: Uncategorized

“Extremism in the defense of liberty is no vice. And moderation in the pursuit of justice is no virtue.” – Barry Goldwater

A lie gets halfway around the world before the truth has a chance to get its pants on. – Winston Churchill

A republic, if you can keep it. – Benjamin Franklin

A nation of well informed men who have been taught to know and prize the rights which God has given them cannot be enslaved. It is the region of ignorance that tyranny begins. – Benjamin Franklin

By obsessing on rare deaths, the media creates a false narrative 180º from the truth

The first “black” president; the first real, half-black president; the second “black” mayor of NYC; and the woman who drawls black when campaigning for president in black churches.